6/21/2010:  This entry transferred from my Bellsouth Art Diary.  This piece was meant to be a sculptural holder for a future mosaic bowling ball. It definitely did not go as planned, and at the end of the sculpting process, one of the arms broke in half.   I threw it away; an experiment / project gone wrong.

Horray -- computer is fixed (again). We seem to suffer alot of software issues, and, as a result, this computer makes frequent (overnight) trips to the PC doctor.

Anyway .....
Started the BB holder (Bowling Ball, that is) this morning.

Then ... had to quit to go pick up the PC. Beau has an outside appointment tomorrow, so will not be able to continue until Thursday. 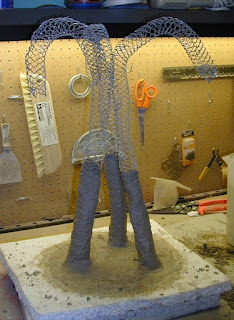 a) Cut cirle out of a piece of styrofoam to serve as the base.
b) Cut a piece of stucco mesh to fit inside the circle.
c) Set circle on top of another piece of styrofoam, to serve as bottom.
d) Mixed up small batch of cement mix (grout/sifted sand/portland cement).
e) Formed small patties, and pushed into bottom of circle.
f) Applied stucco mesh over the concrete.
g) Shaped the three legs and placed on top of the mesh, filling in with additional concrete mix until reach top of circle

Stopped for 4 hours to allow to harden.

h) Mixed another small batch of concrete mix and filled in each leg up several inches.
i) Set aside to dry overnight.

Note: Picture actually taken next morning; batteries were dead while piece went through these processes. 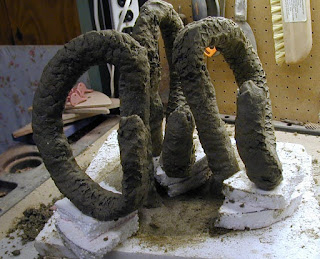 Okay, so some things don't go anywhere near the plan !!!!

a) Mixed small amount of concrete mix and continued pressing into legs of stand.

And then, legs started leaning this way and that way and all kinds of ways ... even though I had tied them together at the top, until I said to heck with it .... This one is garbage .... and untied the wire and let them go.

Down the legs fell, bending perfectly where yesterday's concrete had dried.
So, after a couple minutes contemplation, started moving the legs around, propping them up and whatever.

So, here we are ... perhaps the first piece of sculpture! Will continue on second layer tomorrow ... or sometime soon.

I just have to chuckle everytime I look this. 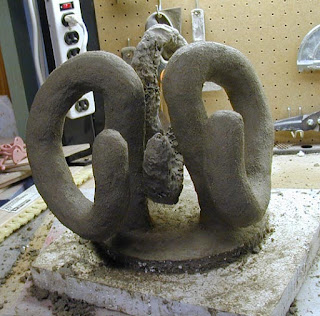 a) Applied cement mix (grout/sifted sand/portland cement) to the two outside legs (not sure what I want to call them know)
b) Smoothed with hands, adding or subtracing cement as needed for a smooth and uniform appearance.
c) Set aside to dry overnight. Tomorrow, I'll complete the middle leg. As the legs are so close together, I was concerned I would bump the outside legs and knock off the applied cement. Tomorrow, that cement will be dry and dumping will not represent the same risk. 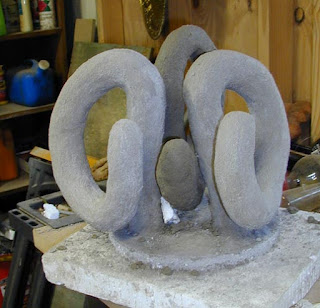 Applied thin layer of cement mix to middle leg of BB Holder. This was a tight fit. Two different places almost touch. Had to insert a small piece of styrofoam at bottom to separate back part enough to work in between. When completed, there is < 1/16" in back separation, and not too much more in the front.

Set aside to dry. Tomorrow, will smooth off the pedestal and apply a thin layer of cement mix to 'pretty' it up a bit.