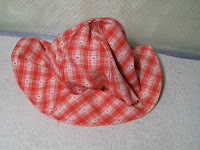 After some thought and several rereadings of the pattern instructions, realized what I had done wrong on the first hat ... it was like a slap ... read the darn directions.
So, picked two shades of red fabric for hat & lining, recut and started sewing. Everything was going gangbusters (I used to have a boss who said that all the time ... not sure what brought it to mind today), until I got to the point where I'm connecting the top to the brim ... uh-oh ... the top is quite a bit larger than the rim.
So, after very little contemplation, I realized they were real serious about those wide margin sewing lines on the pattern itself and in order for (at least this particular pattern) to work, the sewing lines are going to have to be transferred to the pattern.
Well, at least the fabric was really cheap, as once again, tossed it straight to the garbage. I've no doubt I'll start again soon.