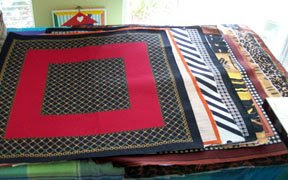 After some thought, realized that I was going to need to cut the scarves down to a uniform size ... i.e., create blocks. I decided on 20"x20" as this was a nice even figure to give me 100" square. Cutting down the scarves results in quite abit of fabric loss and the realization that I'm not going to have enough scarves in the selected color/pattern scheme. (Also, discussed with my sister who suggested that if I wanted the coverlet to be cool (for summer use), that I shouldn't put in the batting).

So, I set this aside for today. We are talking about driving over to Slidell on Tuesday to to to Ruby Tuesdays (really like their salad bar) and Anna's for new linens for the bed. And, while we are there, I'll go into the fabric store and see if I can find a nice piece of corresponding fabric .. something I can cut into 10" strips to place beween the 20" rows.