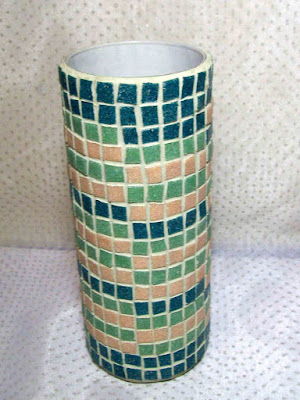 8 years ago we experienced the 9/11 tragedy in New York. It was an event so emotional that one will also remember what they were doing when it happened. I remember. I had just finished pulling Vitreous Tiles from my inventory for a vase; the TV was on. I don't recall what was said, but I looked up and saw the plane hit the side of the World Trade Center. I didn't quite understand what I'd just seen and stood their, fozen to the screen. They replayed the plane hitting the trade center and I was running to get Beau.

We moved to the living room to watch the unfolding the commentary on TV. Hour after hour, we stayed. We watched everything; we listened to it all.

I'm not one to sit still, but I couldn't pull myself away from the television. I pulled out a TV tray and brought out my materials. I cut vitreous tiles into quarters and created this vase.

This was my first vase. It's not a particularly fine art vase as it's a bit boring; lacking interest. To me, however, it reminds me that alot of lives were lost, and even more changed during 9/11. I've never used it, however, it sits on the bookshelf in my living room as an ongoing memorial.