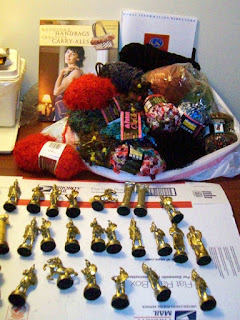 Just because I'm not at home, doesn't mean I can't go participate in Yard Sale Saturday, right? After checking into the hotel last night, picked up both the newspapers and looked for ads ... nothing listed. But, after breakfast this morning, we headed out for some shopping ... (brought mostly shorts and need more long pants ... it's abit chilly around here). On the way, we found two yard sales, that actually ended up being 5 as one was 4 houses together. At the 1st four, found an interesting set of extremely heavy chess pieces. It's not a complete set, however, as soon as I saw them, realized they belonged in a wall piece with blocks that I've in progress in my mind to start on as a June project. Sold - $2.00.

Then, as we were following signs to the 2nd yard sale I made an illegal U-Turn on the mail street (heck there were no cars coming either way), and on came the red lights from a Motorcycle Patrolman. Busted ... I admit it. He mentioned that he was sure crossing the double yellow line like that was illegal in Louisiana as well, and I admitted that I was WRONG, and he told me to be careful, he hated to ruin our vacation and let me go. Okay .... I'm not on good driving behaviour, for at least the next 36 hours, until we leave San Clemente.

At the next (and last) yardsale, selected 6 pieces of interesting yarns. THE WOMAN IN CHARGE, saw me selecting the skeins, scooped up a bag and told me I could have them all for the price of the 6. Well, what the heck, they are light. Also found two craft kinda books on purses that looked fun. I'll look at them at the festival this afternoon.