We have a big walking around day planned. 1st stop is Alcatraz. We board the boat carrier at Pier 33, which is a good 1 1/2 walk from the hotel. But, the sun is shining today, and if the wind wasn't constantly blowing, it might be almost warm. 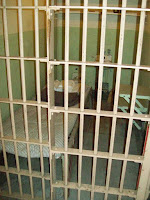 At Alcatraz, we took the headset tour, which was quite interesting. I know there is a concept of how small a prison cell is, but seing them up close and personal puts a whole new concept on small. I'd saw, overall, there probably wasn't more than 3' worth of move-about space. There is alot of deterioration of the prison (salt water and rebar inside the concrete don't make great partners), so only sections of the prison are open. We saw some of the administration areas, a couple cell blocks, the outside yard and the dining hall. It had a great and interesting narration and guided us through the various stops. Prior to Alcatraz being a prison, it was also a military base and for a short while was inhabited by protesting american indians ... learned abit about all of that as well. Then, we boarded the boat back to Pier 33, San Francisco.

It took a few minutes to get our orientation, but we figured out the ground transporation and only had a 6 block walk to the Trolley Stops. After abit of a wait, jumped aboard, paid our $5.00 and rode the Trolley off to China Town. We were so happy to have found the trolley as a good amount of the distance was up very steep hills. 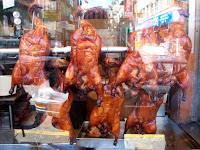 We wanted to see China Town mostly because of how often it is shown on TV and in Movies. Although I'm sure this is a tourist stop, it is more-so of a community where alot of Chinese-Americans live. That's not to say there isn't shops, but not so much the cheesy block after block of T-shirt shops. We were hungry as it was approaching 2:30pm and we hadn't eaten since breakfast. We walked a couple blocks looking at menus on front windows not having decided how to choose a place (and there are literally 100's of small food restaurants). So, just pushed into the next one. Perhaps the only one in the restaurant who spoke english was our waitor, and I don't think it was much english. But, the menu was in both languages and we pointed out what we wanted. Beau pointed to a picture of beer on the wall and got to try a chinese beer, which we liked quite well. The waitor understood diet coke. The food came and it was very good. We walked up and down a few more streets. It was very interesting .. just like shown in movies ... alot of people walking around, food hanging in windows, foods and staples being sold on the sidewalk. When we reached the can't walk another step stage, headed back up a couple very steep streets and caught the Trolley again. Fortunately, it let us off not by 4 steep blocks from our hotel.

Rest and Recoup Time. Did a little reading and a little surfing. But, it was much to early to just stay in the room all evening. We'd been looking at a small bar on the corner out our window .. Voodoo Lounge ... and decided to have a couple drinks. It was just a little neighborhood bar, with about 12 folks hanging around and chatting. It was a nice passing of time. Then we slipped next door and picked up a crabmeat Sub from Vikings, which we took back to our room.