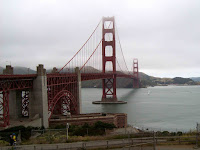 1st up today is the Golden Gate Bridge. Drove the short distance over and parked ... had to pay the meter of course, everywhere here has a parking meter (The other day, had to pay a parking meter to go into the post office). It is chilly .. perhaps in the low 50's, but the fog has, at least, cleared the top of the bridge. Once we got moving, we warmed up slightly so at least we were not miserably cold while we walked. The walk itself is 1.7 miles and is very nice. The views looking both ways are spectacular and it's fun to watch the ships, sail boats and kiyakers is quite fun. There were a good number of folks out walking. Although it remained cold, I'd do this one again. 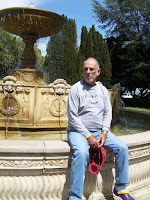 Then, we asked Sophie (our Garmin device) for lunch places, and choose Lou's delicatessan. When we got there, Lou's was not at the location (must have gone out of business) so we choose a pizza place instead. Then, headed to our next planned stop, the deYoung museum in Golden Gate Park. All the the entrances to the park were closed though. We saw a couple saws indicating there was some garage where you could park and take a shuttle to the park, however, could not figure out where it was ((( and finding a place to park on the streets here is like counting on a miracle )) so we gave up and drove across the Golden Gate to Sausilito where we browsed the main street and enjoyed the Starbucks ( and, it was only chilly, versus cold, there ). 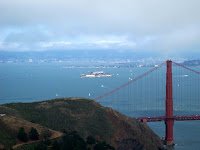 Drove back across the bridge and drove up the hill to Golden Gate Recreation area and took in a variety of the cliff views, as well as the beach and military area in the back. On the way out, just missed a stop light and was sitting when we noticed a sign that said it was a 5 minute red light. When (after 5 minutes) it turned green, we discovered why ... the road led into a one way tunnel. Interesting.

Back to the hotel (about 5pm now), where we relaxed abit then walked back into Fisherman's Wharf for some dinner ... La Margarita's ... which, I now know, I wouldn't recommend to even someone I didn't like.

It's damp and cold here, and I'm so ready to go home.