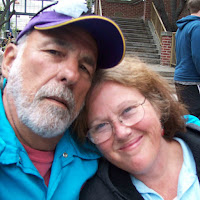 yesterday, while at the Flea Market, saw set up in progress of a really big corner yard sale (meaning it was taking up an entire corner lot) to benefit the local humane society. They wouldn't let us in until Saturday. So, we got up at 6:30 a.m. and after a quick cup of coffee, headed over. (I wanted Beau to come so he wouldn't get bored hanging around the hotel room, and he wanted to come because he thought I was was afraid I'd get lost and wanted him to come). Regardless ... off we went. When we got there, there were already a good 60 folks lined up and as the clock hit 7:am, the hosts said go and everyone started running to the preferred areas. Really quite funny. Once I got started, I was sad that it wasn't a local sale ... there were so many books and supplies that I would love to have scooped up. As it was, I was limited by remaining space and weight in my luggage. After many decisions, I ended up with two cookie containers of old buttons, around 100 tubes of tri-chem fabric paint, 15 old copies of Threads Magazine and one hardback book on Wirewrapping. The large flea market we went to yesterday was just a block down the road, but going back there would have pushed Beau over the boundary line and I left it alone.

Back at the room, we had some continental breakfast, finished packing up and headed down the road. Had to make a stop at the post office to ship two flat rate boxes ... the books, paints, keys, buttons and the cast metal chess pieces home. Amazingly enough, the two boxes came to 48 pounds ... that would have really topped my baggage weight limit !

The only stop we made was Half Moon Bay, where we had some lunch at Half Moon Bay Coffee Company and wandered down the street of the usual touristy town kinda shops.

We arrived at San Francisco about 2pm and checked into yet another Comfort Inn. We're about 8 blocks off The Wharf, so after a short recap and planning, walked down and looked through the really junky tourist attraction shops, walked the pier a bit and had a nice dinner at Pompeii's Grotto. I think the plan is to start tomorrow with a walk across the Golden Gate Bridge.