Back in early January I sculpted four concrete masks using a sand technique.   Then, they were wrapped up in a plastic bag with water to cure.   I checked on them early March and moved them to the back porch, where they have been keeping a watch on whatever it is that goes on back there.

Well, since I've a variety of things lined up for painting, I moved these to the front.    Originally there were four masks, but on one of them, the hook did not properly embed in the back.   I started to throw it out, but Beau put a claim on it.   He's going to drill a hole in the forehead for hanging on a tree.

For the remaining three ... painted them with a base coat to seal the concrete, and then painted on some personality and sealed with polyacrylic.   These guys weight between 2.4 and 2.12 pounds and are roughly 7" wide and between 8 and 11" tall. 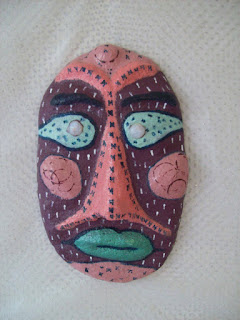 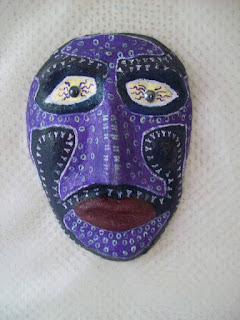 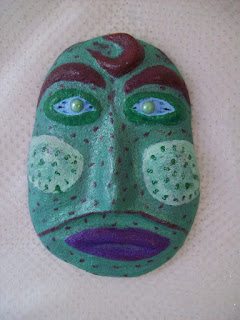 They came out so cool. Thanks for the update...I was wondering what happened with those!

yeah cool to see. i'm liking the purple one :)

Why don't they smile? The purple one's is kinda cute!

Thank ya'll. Jane, my Gods don't currently smile, as I just can't seem to get this technique down ... just somber faces for me. I have about 15 of these in various parts of my yard and I typically call them (whatever name) of the Big Lips Tribe.