If I decide I'm going to sew on any kind of a frequent basis, whether it be clothing or art, I'm going to need a new sewing machine. 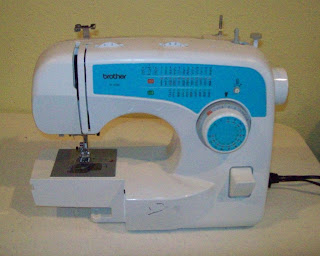 Now, in defense of this sad little machine, Brother XL3500, I bought it with the idea that I was going to play with some paper quilting collage and needed it for texture and effects.  I had previously used a machine I inherited from a mother; an inexpensive machine from the 70s that had never had it's finer moments (from my distant memory, she called it alot of different names ... none of them that kind).  I listed it on Freecycle and it was gone really fast.

To pick this machine, I spent a fair amount of time online reading reviews and had reached the decision that this one, for the $129, would meet by paper collage needs.   I realized that the site I was planning on ordering, Precision Sewing, was only a couple miles from the house (go figure the odds of that!).  So, I called them up to see if I could place my order and just drive over and pickup.   I always like the idea of bypassing shipping charges.    The man I reached, after a considerable hold, was what I would call .... UMMMM Really Rude.   He told me that I shouldn't waste my money on a piece of ***** like that and if I wanted to buy a real sewing machine that I should come in and he would help me out.    When I insisted that I wanted this machine, it would my needs, he said they didn't carry it.   (Like why was it listed on their site anyway?).    Needless to say, I was somewhat perturbed and immediately ordered it online from another company and paid the shipping.

When it arrived, I assigned it a designated place in my studio.   I played with it a little, a couple pieces a paper collage, a dress for Lilly, some clothing repairs.   Not much.   Now, about this machine.   It mostly reminds me on when my son was a teenager.   It's hard to get going.  I don't know what you call it, but if its been more than a couple days, you have to manually turn the wheel for several minutes to get it started.   Then, it takes many opportunities to get jammed up on the way.   And, on top of that, it only fills the bobbin half way, making necessary stops every time you get it going well.

Now, I have an online shop, Todays Treasure, with close to 3000 sewing patterns in inventory and at least another 1000 waiting to be added.   I pick up some of these and have all the ohhs and ahhs of a seamstress.  Just not the talent.  Perhaps, it's time I relearned to sew.  Beau offered to buy me a new one (of my choosing) for Christmas.   I told him, however, that  before I decide on a machine, I should decide just what I'm going to do with it.     Then, perhaps, I'll only have to buy one more machine, versus go through this particular scenario over and over. 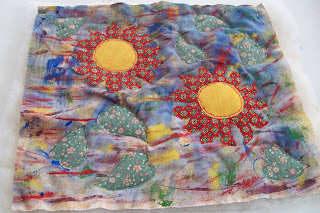 On another note, I continued working on yesterdays practice session.    I fused the applique to my painted fabric, cut out backing fabric and batting and sat down to start the stitching work.     I didn't get too far and what was wrong become obvious very quickly .... it's bunching up.    I decided this was a result of having back the backing sheet on there.    This one I'll toss, and start over again.