I've been watching (listening) the VH1C channel in the morning for the last couple days. Apparently they are having a Beatles week to comemmerate the Abbey Road anniversary last week as well as some Beatles game being released tomorrow. I've seen a couple shows on John Lennon and have learned a whole lot about the man that I'd mostly forgotten (except for perhaps 3 or 4 songs) ... Funny how that works ... So, in honor of John Lennon 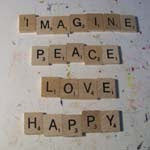 So, I had out the container of scrabble letters from those little pendants I made yesterday, and Before I put them away, thought I'd pull out some letters for words to turn into bracelets. 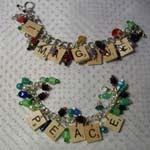 Pulled out a bit of this and that and put together two of them .... Peace & Imagine. I'll create the other two tomorrow.

(( Saw a couple clips of the last Beatle concert on the top of their building in London (I think). Sure wish they'd show the whole concert).