This Northlake Nature Center, as photographed by 'Ktetleu' in July, 2003.  (There are additional pictures in his weblog).

Almost every Monday and Wednesday Beau does Volunteer work at the Northlake Nature Center.   It started way back in 2003.   Larry Burch, who oversees the Nature Center, had a vision to rebuild the building ruins, using as much of the existing materials as possible.   Beau, and Ken, who were already periodic volunteers signed on to help.   And so it went; just like postmen, whether rain, sleet, extreme humidity or heat, twice a week, they worked on the building.  At first, sorting and organizing the debris, and then, brick by brick, starting to mortar it back together. 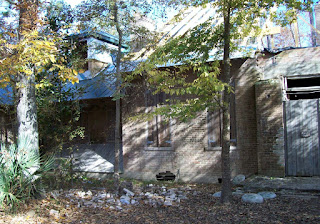 They had made significant progress, when Hurricane Katrina came through in August 2005, and dropped a couple large trees across the building destroying countless hours of their efforts.    For awhile they were forestalled, as they performed hurricane clean-up, removing tress and clearing debris for the hiking trails.  But, by early 2006, they were back to work on the building.

Together, with a periodic additional volunteer once in awhile, they continued their efforts.   Walls went up, windows and doors were built and placed, dormers, a slate patio (from the original), and now the roof  is 3/4 finished.

Two times a week; every week ... three men ... the ruins are no longer ruins.   Upon completion they may become on office space for the Northlake Nature Center, and perhaps a community gathering point for the boy scouts and other groups.    Three men, silently, behind the scenes, working for the good of the community.

I am very proud of them.

what an endeavor! interesting to read this.
commendable work.
ps i keep trying to subscribe to your blog with my google reader and it isn't letting me. do you have your rss thing set to go? i can't imagine its just me having this problem.

this is driving me nuts...i can't bookmark you in my google reader and i had you on my blog log on my blog but you rss isn't showing up so you dont show up when you post anything.
please find someone to get your rss feed working!!!!