I'll start this by saying that I have a large container of Barbie Dolls.   I pick them up here and there, usually for a quarter or fifty cents.   I buy them for their heads.   I suppose that I envision that one day my sewing skills will become good enough to incorporate these heads into mixed media dolls that will hang on walls or suspend from the ceilings.   I'm definitely not there yet.

But one of these dolls made it to Lilly's toy box.   I assume I left it laying around and Beau tossed it in.

Two weeks ago Lilly, when Lilly visited, she found and immediately adopted this very nude doll.   She spent a good deal of time trying to put a diaper (a handtowel) on the doll.  She refused any help; it was as though she were on a mission.   Now at two, I don't know if her concern was dolly was nude or if dolly needed a diaper so she wouldn't pee on the floor.  Who knows.   She finally allowed me to change the dishtowel to a small paper towel, which we taped on her. 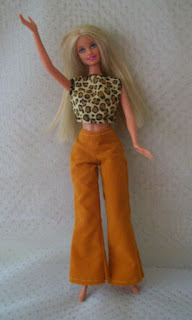 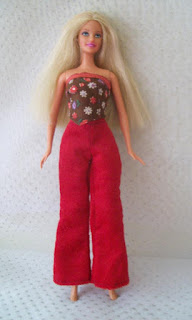