I was going through the next batch of patterns to list in my shop the other day, and came across this one .... McCalls 2360.   Oh WOW. 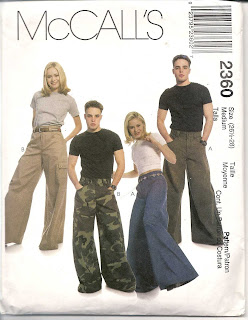 As I recall it, Alex was 15 (2001) and going through his Goth stage with big, wide leg black pants.    I refused to pay the $70 pair Tripp Jeans cost and, in a more desperate moment he suggested he could make them himself.   Well, I was all over this concept, being a firm believer that young men should be able to cook, clean and do some simple sewing by the time they leave home.   When the weekend came, we piled into the car and drove to Slidell to Hancock Fabrics.   After a good two hours of contemplation, he picked McCalls 2360 to be his pattern and had selected three different fabrics.    I was so happy; my son actually wanted to learn to sew.  (Perhaps I foolishly equated that to mean he wanted to spend quality time with his mother .... ya right).

Cutting and laying out the fabric went fairly well, but the rest ..  lets just say it went downhill.   He really didn't want my help, and he wasn't much interested in reading the instructions.  His frustration level peaked frequently and he refused to double seam or overstitch (don't remember the actual term) as it was too time consuming and gave in long enough to allow me to put in the zipper for him.

But, I have to say, he did get them put together.   They didn't stay put together too long, but we didn't talk about that.    I don't even recall what happened to the other two pieces of fabric and the pattern was eventually tossed; it was missing pieces.

Well, at least he left home with cooking and cleaning skills.   (I put this pattern in my shop, just in case you have a teenager and would like to experience this one yourself !)

I wish my mother'd shown me how to sew, but she showed me how to bartend, instead. I figured out enough on my own to mend small tears or holes in seams, at least. The way I see it, I'm keeping tailors in business. *L*