Wish Upon a Star Applique Wallhanging and Food Story 1

I selected Wish Upon A Star Quilt Wallhanging from my inventory as my next 'Adventures in Sewing' project.     It looked a great beginner pr oject. 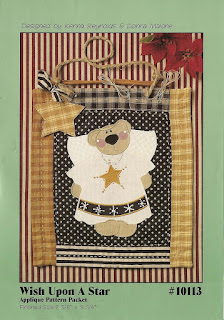 The pattern called for tracing the appliques to make the pattern pieces (versus cutting out the paper pattern), but I photocopied instead.   I discovered a short time later that step is not necessary as the fusible web is fairly see-through and you can just lay it over the pattern and trace.   I managed to get everything cut out and the applique in place before lunch.   The picture has rosy cheeks, and there was not such template ib the pattern sheet, so I just cut little circles. 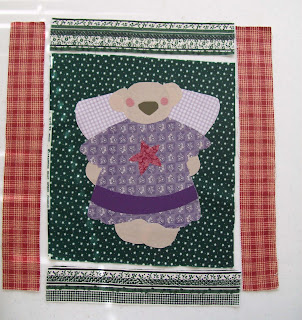 After a little practice and a few unmentionable words, I finally got the zig-zag function on my inferior machine figured out got the outline stitching done. 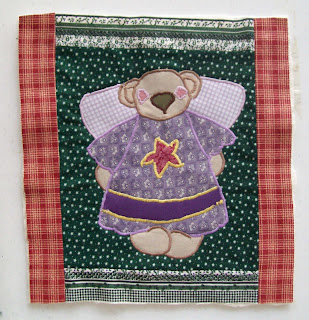 I hauled it back to my workbench to read up on putting in the eyes and the rest of the features and OH WOE IS ME ... I can't find the instructions.    I looked all around my room, at this stack and that.   Went through the recycle as well as the garbage, twice.   Checked the bathroom, kitchen, refrigerator, the other bathroom.   Everywhere I'd been and no ... I can't find.  This type of thing drives me to distraction.   I know that I should be able to figure it out from here, but the plan was to follow the directions, learn what needed learned, before I start freelancing.

So, it's on the back table, awaiting the return of the instructions.   They will probably be there tomorrow.

I started clearing my workbench when the CD Changer brought a Simon and Garfunkle song.   This got me to thinking ....

I started the 6th grade in El Cajon, Ca, where I quickly learned that the only thing worse than being short and fat, with red hair and freckles, is being all of that while wearing a dress. California girls do not wear the standard dress or skirt to school as did Oregon girls, but instead have fun tops and pants.  Even if we could have afforded these clothes, Mother believed girls belonged in dresses.

Mother and I lived with Penny, her best friend from High School, and her much older daughters, Marcy and Diane.  Fortunately, for me, the apartment was only 2 blocks from my school.  This allowed me, along with a note, to go home for lunch.

I loved being in the apartment alone for that 45 minutes each day.   Typically, I made a bologna sandwich with a side of ice cream.    I'd put an album on the record player.  Growing up, my mother had music; 1000 string instrumental Lawrence Welk kinda stuff.  But Marcy and Diane had lots of other music.   My favorite, at the time, being Simon and Garfunkle.    I'd turn up the volume, much louder than would have been allowed, and I 'd sing.   I knew the words to every song.  I'd sing as loud as the music.  During pauses, I'd have bites of my lunch.    And then, I'd shut it all down, putting the album carefully back into the cover (as I'd never received permission to touch them), and I'd go back to school.

Instead, Marcy took up singing The Boxer, slightly under her breath whenever I was around.  And, whenever I came home for lunch,  I checked the rooms before I put on the music.

Thanks for dropping by,