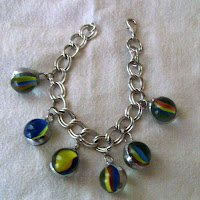 Back in June I did a little experiment of using E6000 to glue bellcaps to standards and it was, A COMPLETE FAILURE.    After completition, it didn't take but a couple hours for the marbles to start seperating from the bellcaps.   The sad bracelet has been sitting on my side board ever since; awaiting  ....

Round Two ....
I picked 8 generic marbles (I must have literally thousands in inventory).   As it's an experiment; it doesn't really matter what they look like.
Cleaned the marbles.
Cut and attached a thin piece of foiling tape around each marble, overlapping about 1/2".
Soldered a jump ring.  The jump ring sits at the top of the overlap. 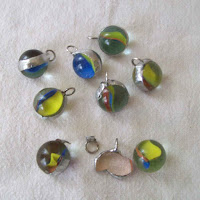 Soldered the rest of the way around each marble.
Washed and dried
Sanded out rough or unattractive points with the Dremel.

Two pieces fell apart almost immediately.  One the tape just came off, intact and the other the tape appears to have failed at the seam.   I'm guessing, on these two, that I didn't get the tape attached well enough.

Attached the remaining 6 to a marble to a silver chain bracelet, which I've put on and am going to wear for the next few days; kind of like a stress test.